Co-founder of Flutterwave Inc, Iyin Aboyeji, has announced his resignation as CEO of the company. According to sources, Aboyeji who has been CEO of the financial services provider since he created it in 2016 is stepping down to “pursue family goals.”

Speaking on his resignation, Mr Aboyeji expressed his confidence in the new leadership.

“It’s been amazing working with the Flutterwave team to build another great African company and I’m excited for the future under its new leadership,” he says.

Mr Aboyeji will be replaced by FlutterWave’s current Chief Technology Officer, Olugbenga Abgoola. With huge experience in building financial technology at notable companies like PayPal, Google, GTBank, and Access Bank, Mr Agboola is a perfect replacement for the job.

“No Issues” With Aboyeji

Speaking on phone with TechPoint, Mr Agboola doused all fears that Mr Aboyeji may have been forced out, perhaps by the new investors.

“There are no issues,” he said. “Because of the next phase of growth of the company, Iyin has chosen to step down for personal reasons, nothing else.

“It’s just like the next thing that should happen is happening. This speaks to the fact that Flutterwave is not just a one-man organisation; the company is bigger than anybody right now.” 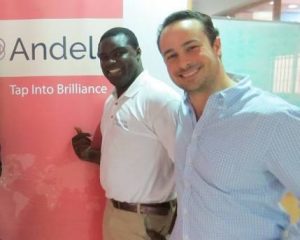 Aboyeji was a cofounder at Andela. He left to launch FlutterWave.

Nonetheless, Mr Aboyeji’s resignation still comes as a bit of shock. But it is not unusual of him though as he left Andela in 2016 following the company’s $24 million funding from Facebook founder, Mark Zuckerberg. Don’t be surprised if he launches another startup anytime soon.

Flutterwave Gets New Series of Funding

In an earlier development, Flutterwave concluded a new ‘Series A’ extension round of funding with MasterCard, Fintech and several other financial giants taking part in it. This paints an impressive prospect for the Nigerian company which, according to sources,pooled in around $10 million from this

As an extension, the round follows from Series A funding the company raised way back in July 2017. Led by investors such as Greycroft Partners and Green Visor, Flutterwave raised $10 million in that round.

Alongside MasterCard, this round saw new investors commit to FlutterWave. They include CRE Ventures, Fintech Collective, 4DX Ventures, Raba Capital, and others.